In 1887, soon after the School moved to the ‘new’ Waterhouse building, the then Headmaster, Rev. Eves, established a School Museum to house interesting artefacts, donated by boys, Masters and friends of the School.

The Museum continued to exist until the early 1950s and the Guisborian Magazines contain many references to new contributions to the collection. The December 1944 edition says “our museum continues to grow and flourish; we have now an interesting collection in the library”. Using the Guisborians, we have some idea of the items that were in the Museum. These included models of ships, The Times newspaper from 1815 reporting the Battle of Waterloo, buttons from the uniforms of the Almshouse Pensioners and an early British Urn found on Eston Nab containing human bones!

However, little is known of what happened to the artefacts after the Museum closed and for many years, we believed everything had been lost. However, in March 2013, during a refurbishment of the Waterhouse building, in an old, sealed cupboard many relics were found together with the original labels from the Museum. For some of these items, we can establish provenance by references in the Guisborians but for others, no records exist.

The items found include

An Egyptian Shabti, pictured left,19cm tall and made from wood, covered with a dark resin or bitumen. It resembles Pharaoh Seti I of the 19th Dynasty 1292BC to 1189BC and may have come from his royal tomb. In Ancient Egypt, shabtis were funerary figurines that were placed in tombs among the grave goods and were intended to act as substitutes for the deceased should they be called upon to do manual labour in the afterlife.

A second Egyptian Shabti (on the right), 12cm tall and made from ‘faience’ or glazed composition (a quartzite-based paste with copper glaze) and probably dating from the 26th Dynasty 664BC to 525BC. This particular shabti probably belonged to a non-royal official.

A small bottle made from marl clay (shown below left). The original museum label tells us that the bottle was dug up near the River Jordan on 3rd March 1944 and found beneath 6 feet of sandy loam. It resembles ware from the Levant and possibly dates from 300BC to 200AD and possibly would originally have contained oil or perfume. 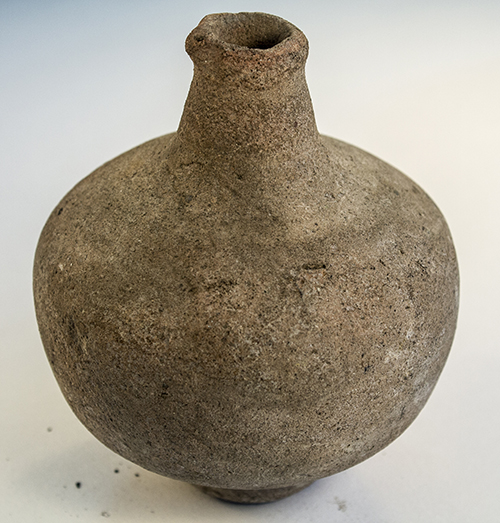 A piece of wood labelled as being from the wreck of the Princess Alice donated by L Harrison who was a student at the School between 1893 and 1896. The SS Princess Alice was a passenger paddle steamer which sank following a collision on the River Thames in 1878 with the loss of 650 lives, the greatest loss of life in any Thames shipping disaster.

For these four items, we are grateful to the British Museum, The Royal Maritime Museum and Durham University for their help.

We have also found: 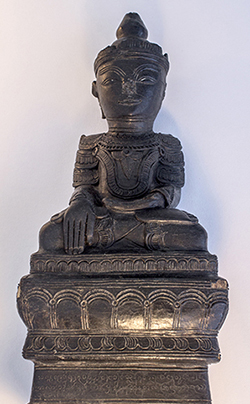 A Temple Idol, shown on the right, and one of a pair of Burmese Slippers donated by Mr Tamblington in 1902 as documented in the Guisborian Magazine of that year.

A Russian spoon, made from wood. The label tells us this was donated by Douglas MacCurrach who was a student from 1889 to 1891.

Fishing lines from Melanesia donated by John Still in 1894

The rostrum, or nose extension, of a Sawfish (Pristiforme). It is possible that this item was donated to the Museum at the same time as the fishing lines above.

A piece of silver possibly from Military Dress or Uniform. It was manufactured by Grish Chunder Dutt and Sons of Bhowanipore, India, silversmiths who operated between 1872 and 1947 "by appointment to His Excellency Viceroy and Governor General of India".

Other, smaller, items have also been found are still being analysed and researched.