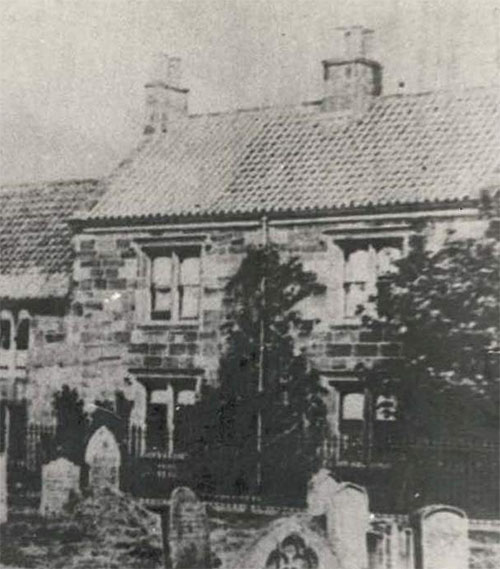 William Harrison's memories - the grammar school in the 1860s

In the 1930s, one of the oldest of Guisborough Grammar School's Old Boys, William Harrison, came back to the school to tell the tale of his own schooldays in the mid Victorian period. His account was written up into an article for The Guisborian and published in the April 1933 issue. It is reproduced here by kind permission of Mr W. N. Thompson, who loaned us his copy of the magazine.

'In Mr Harrison’s time the School Buildings were situated about 40 yards to the south of their present position, virtually within the church yard. They consisted of one school room with the almshouses next door. In the latter lived 12 old people who came to School each morning at nine o’clock for prayers. Mr Harrison well remembers the times when he came late and had to slink down the steps and drop down among the alms people on his knees. The steps, of course, were necessary because the ground of the churchyard was a foot or so higher than the school floor level.

'The Schoolroom itself was a fairly large room, with a high desk for the master, Mr Dixon, at one end, the only fireplace being situated most conveniently near. The rows of forms came right up to the master’s desk and very fortunate indeed were the boys who could manage to occupy the very front seat: out of sight.

'There were no windows at all in the North wall, but there were some in the opposite one, which also had the door. Along that side was a row of desks arranged at right angles to the others facing the windows. It was in one of these that Mr Harrison used to sit, the only seat he ever occupied at the School.

'The Headmaster was assisted by 2 young men, the Ushers who contrived to conduct their respective lessons in the same room as the Headmaster. The latter had rather extensive duties beyond his educational capacity for he was the curate for both Newton and Upleatham. He took alternate services on Sundays at each.

'There was no playing field on the North side of the School, so the pupils expended their surplus energy in the Applegarth. Strange to relate, a favourite pastime of the juniors was to play and run around the Church itself, which had to be “content with such audacious neighbourhood”.

'From the pupils’ point of view, School life seems to have been rather primitively conducted, but on the whole they would surely have preferred their comparatively blissful state, from such notorious labours of love such as rolling the cricket pitch!

'Each newcomer to the School had to show his mettle in a stand-up fight with a suitable representative of the School about his own size. This was a very necessary adjunct to a scholastic career at the Grammar School, for feelings between the boys and the town lads often ran high, and contact usually meant a clash.

'Cricket was played on the Applegarth in an unscientific but thoroughly satisfactory manner. Another common game, which is now extinct in this part of the country was “Knur and Spell” in which the subtle art lay in skilfully hitting a wooden ball, which one trapped into the air from a trap arrangement. A great event in the School year at that time took place on ‘Pancake’ Tuesday, when all indulged in a haphazard sort of football with the town boys, rather like the proceedings today at Chester-le-Street.

'In School, no French was taught, but Maths and Latin were specialities and Greek was learnt (?) by 2 boys. These were the Headmaster’s son Arthur and one of the boarders and we are assured that they never reached as far as learning the whole alphabet but daily struggled on round Alpha, Beta and Gamma. However, on Prize Day it was always the boarders who carried off the prizes, to the discomfiture of the day-boys.

'One pupil, from Saltburn, was invariably inferior to Mr Harrison at School, in spite of his special routine. The Saltburnite was regularly pounced on by his mother when he reached home in the evening. His boots were removed and after tea he was placed before the fire to study diligently and in comfort till bed-time. The system always proved a failure compared with that of the Guisborough boy, who daily repaired to a high lime tree near the Priory Arch and learnt his lessons whilst up among the branches!

'Evidently boys’ tastes and consciences have remained unchanged since 1860, especially concerning apples that grow on private property! At that particular time a certain gardener’s special pride was his fine apple tree which stood in sight of the School. Unable to resist the temptation a William Hartley, who sat next to Mr Harrison, arrived one morning with his pockets crammed with apples. After much consultation, they were temporarily deposited in his school-mate’s desk. Before the morning was over, the irate gardener arrived and told his tale of woe. The Headmaster immediately inspected each desk till he came to that one, and as speedily hauled out our innocent hero and punished him! Mr Harrison did not reveal what happened to the real culprit after school.

'He also recollected another tanning, this time one well merited! The reason can be still seen at School in the form of ‘W.H’ carved on desk lid. Another episode with a concrete proof centres round the nurse who resided at the almshouses. It appears she called Mr Harrison to her one day and presented him with a lucky shilling (with a hole in) which he still possesses. Her words intrigued him greatly for a very long time before he realised what they really implied. They were “Willy honey! Take this, and as long as you keep it you’ll never lack money!”'