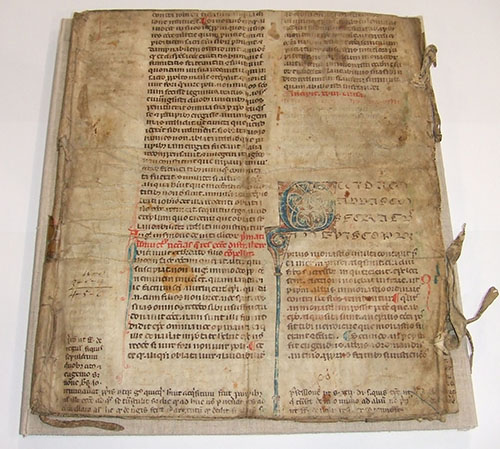 These pages are from a medieval manuscript written by monks or canons in the early thirteenth century. Along with two other pages that will soon be digitised, they have been identified as sections of a treatise on canon law, Gratian's Decretals. They are the oldest documents in our collection.

They survived because they were used as covers for sixteenth-century copies of the statutes and accounts of Guisborough Hospital.

To view the individual pages, please click the links below.

In spring 2012 these documents went away for conservation with Stephen and Pamela Allen, paper conservators based in North Yorkshire.

The conservators removed and digitised the covers, revealing words and pictures that had been hidden for over 400 years. The images below were made at the Record Office in Northallerton, and show the pages unfolded and laid flat.

After digitising these remarkable survivals, Stephen and Pamela Allen carefully replaced the covers. They also stabilised an area on the back of Z158 which had decayed so badly that the parchment had come loose.

With help from Dr Judy Frost and Dr Deborah Thorpe of the University of York, we have discovered a little more about these fragments. We suspect that they may have been part of a book read out to canons in the refectory of Gisborough Priory at mealtimes. If so, this makes them the only manuscript from Gisborough Priory to remain in Guisborough.

Why were these medieval pages used as covers?

After the Dissolution of the Monasteries, a lot of religious books became scrap paper.

New paper was expensive, so people re-used the old paper coming out of monasteries and priories - like Gisborough Priory.

Sometimes they scraped the vellum clean, clearing off all the old ink, and wrote on the paper. And sometimes, like with our manuscripts, they used the pages as covers to protect newer documents.

We may never know for sure, but we believe that the manuscript may have been given to Guisborough Hospital by Robert Pursglove.